History Just as the Gloster Meteor, the Vampire is a first generation jet fi ghter. Its first flight took place…

Just as the Gloster Meteor, the Vampire is a first generation jet fi ghter. Its first flight took place on the 20th of September 1943, followed by 3285 production aircraft. The concept followed by the de Havilland engineers was simple: constructing the smallest possible fuselage around a Goblin jet engine. The tail plane is connected to the metal wings via two metal tail booms, while the fuselage is of wooden lightweight construction, a legacy of de Havilland’s most famous Second World War aircraft, the Mosquito.

Based on the fighter version, de Havilland developed the T11 trainer aircraft, the British counterpart to the American T-33 that can also be seen in the collection. First flown on the 15th of November 1950, it became popular among Britain’s allies, and 991 trainers were delivered to 24 countries. The last T11s, in service with the Swiss Air Force, were retired only in 1991!

The Vampire was also license-produced in France, at SNCASE at Mérignac. Designated “Vampire” and “Mistral” in French Air Force Service, nearly 500 were built and used extensively in the Algerian War until their retirement in 1961.

The Vampire largely resembled other World War Two era aircraft, with a rather unorganised and cramped cockpit, but pleasant to fl y. The only drawback was a lateral instability due to small fi ns and rudders, a problem never completely remedied.

The displayed aircraft, Royal Air Force identity XE950, served as a ground instructional airframe in a technical school in Great Britain until it joined our collection in 1988. We restored it in the 1990s, but the wooden structure suffered from outside display. In 2011, the fuselage was given to the IFI Peinture, a technical training centre at Colomiers, where some trainees restored it and reinforced it with some composite material (with the kind support of the UIMM). The engine is currently stored in a protected hangar. 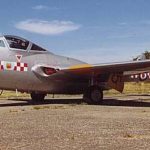 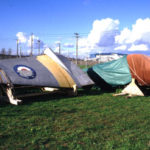