History The Lockheed T-33 is the trainer version of the Lockheed F-80 Shooting Star, the first American jet fighter to…

The Lockheed T-33 is the trainer version of the Lockheed F-80 Shooting Star, the first American jet fighter to become operational. The prototype F-80 made its maiden flight on the 8th of January 1944, but it was the T-33 trainer version, first flown on the 22nd of March 1948, that would ensure the success of the type with 6557 aircraft delivered.

The T-33 rapidly gained the reputation of being a “nearly perfect aircraft”, easy to handle, wellequipped and offering a good performance.

The Shooting Star became the standard jet trainer of the US Air Force and US Navy, as well as most of the NATO countries and their allies. Most of them were retired in the 1970s and 1980s, but the Bolivian Air Force is still using the type for training.

From October 1951 onwards, France received 224 T-33s that were used for advanced training and air combat training, as well as 6 RT-33 reconnaissance versions. The last aircraft were retired in 1981.

The displayed aircraft is an ex-French Air Force trainer, coded 314VV, and arrived in airworthy condition in 1984. It was restored and repainted in the 1990s and currently is displayed in the colours of a Hawaii Air National Guard machine. 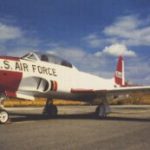 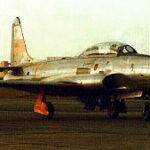