History The Alcyon (“Kingfisher”), of which 205 aircraft were produced, is an improved version of the underpowered MS 730, equipped… 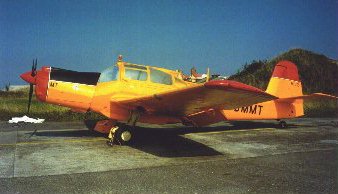 The Alcyon (“Kingfisher”), of which 205 aircraft were produced, is an improved version of the underpowered MS 730, equipped with a more powerful Potez 6D engine and retractable undercarriage. It made its maiden flight on the 16th of April 1951 and went on to serve as a training aircraft with the French Air Force until 1963, and as civil trainer at the “Service de la Formation Aéronautique” until 1978.

However, during its service career, the aircraft continuously suffered from being underpowered. Nevertheless, due to its good flying characteristics, structural reinforcements to limit the damage of wheels-up landings and the capability of carrying a second pupil in an observer seat behind the pupil and the instructor, it proved a useful trainer.

During the Algerian War, trials were done with armed Alcyons as light air support aircraft, but quickly abandoned due to the bad performance of the aircraft, aggravated by the hot climate in North Africa.

Our aircraft was donated to us by Mr. Maurice BOSC of Réalmont in 1982 and transported to Toulouse by road. It was completely restored to static condition in the 1980s.