History In 1929, C.G. Taylor designed a simple and inexpensive two-seater training aircraft. He flew on September 10, 1930 with a…

In 1929, C.G. Taylor designed a simple and inexpensive two-seater training aircraft. He flew on September 10, 1930 with a Bronwach engine and then a 40-horsepower Salmson 9AD. The production of the French engine was completed and a 37-horsepower Continental A-40 was issued. The aircraft was certified and entered service in 1931.

In 1935, after Mr. Taylor’s financial difficulties, the company was bought by William Piper and took its name. Several improved versions were released, including the J3 which flew for the first time in 1938. They were differentiated by construction or engine details.

Beginning in 1939, the Civil Pilot Training Program was established in the United States to provide a large number of pilots to the armed forces. Training took place on Piper J3. The armed forces also adopted the J3 for observation missions under the designation L-4. Thus during the Second World War, the Piper L-4 would take part in operations on all fronts by carrying out liaison missions, observation, medical evacuations…

After the end of hostilities many military aircraft were distributed to allied countries or sold into the civilian, while Piper was studying improved versions. These received engines with a power ranging from 90 to 150 horsepower, with a notable increase in performance. These aircraft had both civilian and military careers (L-18 and L-21). Production came to an end in 1981, with an estimated 35,000 aircraft produced in all versions.

France received its first L-4 in 1942. They were assigned to the army for observation missions and served in Europe, Africa and Asia, supported from 1951 by L-18s (95 hp). The last were withdrawn in the 1960s.

The J3 is a robust, simple, easy-to-fly aircraft. Because of its landing gear in sandows, you have to pay attention to bounces. As it does not have flaps, approaches are sometimes carried out in slides. Some aircraft were equipped with skis for mountain flying. The 95 hp engine was highly recommended.

Our aircraft arrived in 1986 from Meaux. 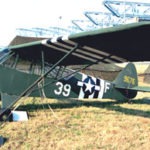 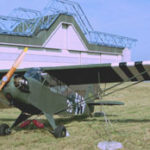