History The F-100 Super Sabre is a development of the F-86 Sabre which had seen combat in the Korean War.…

The F-100 Super Sabre is a development of the F-86 Sabre which had seen combat in the Korean War. The prototype of the Super Sabre made its maiden flight on the 25th of May 1953 and immediately passed the sonic barrier, the first production aircraft to do so.

More than 2000 Super Sabres were produced, thevast majority being F-100Ds, a fighter-bomber version. The aircraft were used by the US Air Force in Vietnam, but also by Turkey, Taiwan, Denmarkand and France.

France had received its Super Sabres, mainly F-100D fi ghter-bombers, from 1958 onwards. Among the tasks of the four French Super Sabre squadrons was the use of tactical nuclear weapons. Later on, the Sabres were mainly used for operations in other countries before being replaced by the SEPECAT Jaguar (that you can also see in our collection) in 1975.

Today, only very few Super Sabres are still airworthy. Some are used as flying testbeds or target drones, while others are owned by private aircraft enthusiasts.

The aircraft displayed is an F-100D fighter-bomber used by the French Air Force. It was handed back to the United States and fl own to Bitburg, Germany, for display in the local aircraft collection. When this airbase was closed in 1995, the aircraft was handed over to us as a long-term loan from the US Air Force Museum. 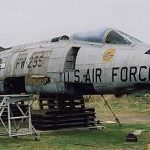