History When the prototype of the DC-3 first flew on the 17th of December 1935, it immediately revolutionised air travel.… 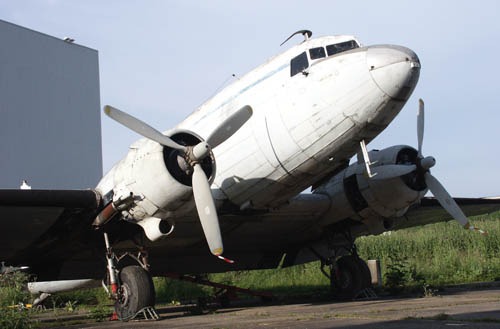 When the prototype of the DC-3 first flew on the 17th of December 1935, it immediately revolutionised air travel. The DC-3 was safer, more comfortable and faster than all of its contemporary competitors. However, it was the Second World War that made the DC-3 (or the C-47, as the military variant is called) the transport with the highest production number in history: in the USA alone, 10.665 aircraft were delivered, with thousands more manufactured under license in the USSR and Japan.

For the whole duration of the Second World War, the DC-3 (or “Dakota”, as it was called by the British) performed a huge variety of tasks, dropping supplies and paratroopers, towing gliders, transporting goods and troops, etc. After the war, General Eisenhower, the allied Commander-in- Chief in Europe, counted the DC-3 among the 4 things that helped the Allies win the war.

In the post-war years, the DC-3 was virtually ubiquitous, with American war-surplus aircraft flooding the civil transport market or being handed over to allied air forces. Even nowadays, many DC-3s are still in use especially in Africa, South America and Asia. Due to its ruggedness, cheap operation and easy maintenance, the DC-3 has outlived several successors.

The French Air Force and Navy used the DC-3 from 1944 to 1971 and 1982 respectively. These aircraft saw service all around the world in the French colonies, and especially during the war in Indochina.

The displayed aircraft, serial number 42-93654 (identifying it as an aircraft ordered by the US government in 1942), started its career as a military C-47. After the war, it flew with several private owners before being abandoned at Toulouse-Blagnac airport. We bought it when it was auctioned off a few years ago. Unfortunately, the aircraft is in dire need of a restoration. Albeit some parts such as the flaps, ailerons and rudder have been dismantled for restoration, no major work has been undertaken until now. 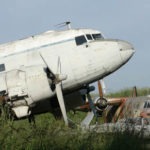 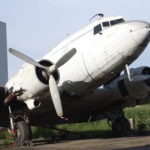 The airplane can be visited during our special events: the Visites Cockpit and theWeek End aux Ailes.