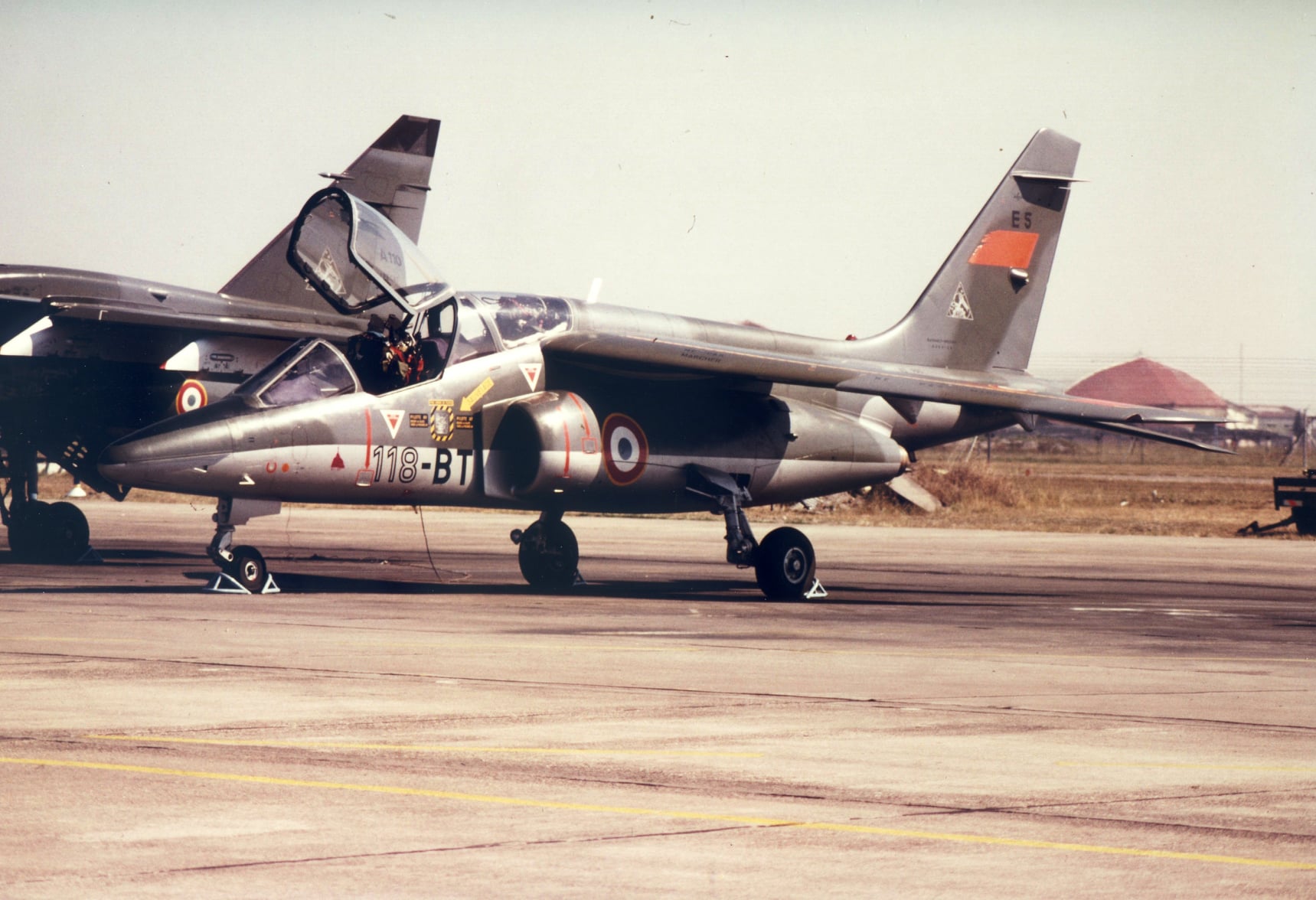 In 1965, the German and French air forces sought to replace the Lockheed T-33 and the Potez/Aérospatiale Fouga Magister. This requirement led to a joint call for tenders for both armies for a subsonic training and attack aircraft.

The companies Breguet, which will later be bought by Dassault, and Dornier then teamed up to propose the TA 501 (for Training & Attack) which will be based on the concepts of the Breguet 126 on the French side and Dornier P.375 on the German side.

On July 23, 1970, the contract was won by the alliance and the aircraft took its final name: the Alpha Jet. It will be produced in two versions: the A version of attack, recognizable by its pointed nose, for Germany and the E version for France with a rounded nose that promotes stability.

On 26 October 1973, prototype 01 of the Alpha Jet made its first flight to Istres in the hands of test pilot Jean-Marie Saget. The first production aircraft, the E1, made its maiden flight on 4 November 1977.

The aircraft will be available in several versions:
– Version E for training
– Version A for attack
– MS1 and MS2 versions of Enhanced Avionics Attack for Egypt
– Enhanced avionics training version E+

In total, no less than 512 units have been built and 12 of them have equipped the famous Patrouille de France since 1981.

Most of the 500 aircraft produced were made in one of the buildings of the Dassault-Breguet factory in Colomiers (where the Ailes Anciennes stayed for several years). This plant was integrated into the Aerospatiale site, then Airbus in the early 1990s.

Under this cooperative programme, the production of the Alpha Jet sub-assemblies was divided between France (Dassault-Breguet), Germany (Dornier) and Belgium (SABCA), with each country taking over the final assembly of the aircraft, in their respective facilities.

Contrary to what one might think, no components were manufactured «in double»: Dassault-Breguet produced the forward and central parts of the fuselage, Dornier the wing, the vertical fin and the aft fuselage. As for SABCA, it was in charge of the front end and the shutters.

Dassault-Breguet was thus in charge of the largest of the three assembly lines of this jet. Located in Colomiers, near Toulouse, at the very beginning of the 80’s, it had a rate of 13 planes per month (maximum 15!) in order to satisfy the needs of the French Air Force and customers for export. The Dornier’s line had an average of 6 planes per month. A total of 4,500 people were employed in the manufacture of Alpha Jet in France and Germany (these figures include equipment manufacturers and subcontractors).

It should be noted that Egypt has installed its own aircraft in its factory in Hélouan (version MS2).

In all versions of the Alpha Jet (there are 6), there are two main families:
– training versions: French E and Belgian IB/IB+
– attack versions: German A’s and MS1/MS2’s sold mainly to Egypt;

To recognize them, nothing is easier since just look at the nose: it is sharp on the attack versions and rounded on the training versions. This difference is explained by the fact that the rounded nose (which also includes 2 fins called virures) provides better stability, which is beneficial for pilots in training.

On the engine side, we find a Turboméca Larzac 04 but with variants depending on the versions. We will have a Larzac 04-C6 of 1,250 kgp on the training versions and a Larzac 04-C20 of 1,438 kgp on the attack versions. It could be interchanged with the C6 version. Externally, the 2 variants are identical, the difference being made on new turbine blades (we gain 30°C on the temperature of turbine inlet) and on the management of the engine allowing a gain of 4% of the flow of the high-pressure compressor. Note that the Larzac has been tested on a Falcon 10 and precisely the Falcon 10 N°2 from our collection!

As for the wings, it is a high canopy, with an arrow of 28° to 25% of the rope. The trailing edge is entirely occupied by movable elements: dual-slot Fowler-type flaps and ailerons.As for its fixing, we find an architecture similar to the Étendard and Super Étendard: the wing is bolted to the central box via 60 screws of 5 different diameters and «imprisons» sandwiched between them and the fuselage a bulkhead for sealing the central tank. Here again, a difference between the attack and training versions: 2 points for training and 4 for attacking.

As for the landing gear, it’s a tricycle landing gear that goes all the way into the fuselage. A peculiarity of the front landing gear: it is shifted to the right of the fuselage. The reason? It’s a matter of passing shells. The Alpha Jet can board a cannon pod (a 30 mm for the French and a 27 mm for the Germans, the 2 having a store of 150 shells) which mounts on the ventral point of carriage. To avoid damaging the leg during a gear down shot (on the ground for adjustments in particular), it was necessary to space the trajectory of the projectiles and the train. It was therefore decided to shift it to the right side while the barrel will be mounted on the left of the nacelle which leaves it enough margin.

The ejection seats were also different depending on the versions: SEMBB AJR M4, for French retrofit front aircraft, Martin-Baker B10N “zero-zero” for Belgian aircraft,Martin-Baker F10N, for French planes after retrofit, those of Qatar and Egypt, and finally Stencel S-III-S3AJ seats “zero-zero”, for German Alpha Jet.

Last technical point on the aircraft of the Patrouille de France: they are slightly modified Alpha Jet E: they carry in center point a smoke pod that sends the mixture gas oil + dye in the nozzle of the left engine, are equipped with a headlight in the nose and the sight has been removed. They also carry an inverted flight accumulator (called a Vi accumulator) to ensure fuel supply during the back figures (which last longer than the “usual” manoeuvres used in combat).

The E5 is therefore one of the leading products of French production. He will make his first flight on 30 November 1978 and his landing flight on 11 January 1979. As with all new aircraft entering service, the first copies are entrusted to the CEAM in Mont-de-Marsan, whose “équipe de marque Alpha Jet” will have for mission to evaluate the type, to establish the field of use, to draft the documentation, to train the first pilots, etc.The E1 is submitted to the CMTC on 19 May 1978, and the following four (E2 to E5) follow between June 1978 and January 1979.

It is taken into account in January 1979 by the CEAM, which assigns it the code 118-BT, as the first 4 production aircraft. At that time, the CEAM also had the mission of transforming the Belgian and Moroccan pilots. It is therefore very likely that trainees from these two countries also flew on the E5.

He then left the CEAM briefly in October for Tours, where he was detached to replace an aircraft used for the smoke pod tests, he then received the code 314-LI but quickly returned to Mont-de-Marsan, this time with the code 118-BU. In October 1987, still at the CEAM, its code became 330-BU, following the reorganization of the CEAM which takes the mechanical designation «CEAM 330», with its fighter squadron EC 24/330 to which are attached the Alpha Jet and all the hunters. It then becomes 330-BT, still at the CEAM.

In the early 90s, he finally left Mont-de-Marsan, for 8 Fighter Wing in Cazaux, whose two squadrons (EC 1/8 Nice and EC 2/8 Saintonge) began their transformation on Alpha Jet in January 1982 (they were flying on Mystère IVA). It takes the code 8-NS within 1/8 Nice.

In April 1991, shortly after its arrival in Cazaux, the E5 was assigned to one of the bombing squadrons, EB 2/91 Bretagne, which flew on Mirage IVP. The purpose of this assignment is to allow Mirage IV pilots to continue training at a lower cost and to carry out liaison missions, following the withdrawal of the Mirage IIIE from the FAS. He then received on his drift the insignia of the “Brittany”. Rare are the Alpha Jet who had this privilege… He left Brittany on 6 July 1992, replaced by another aircraft.

In May 1997, he changed regions following his assignment to the 2/7 Argonne fighter squadron, based in Saint-Dizier with his Jaguars. In fact, since 1995, the staff had decided to assign a few Alpha Jets on an experimental basis to a tactical air force squadron. Our E5 receives the code 7-PE, and its drift is repainted with the insignia of the 2/7 squadrons, the rooster and the Greek archer.

In 1999, the two-tone camouflage began to fade away to give way to the new, plain “grey”, but the E5 escaped.

It was definitively reformed in February 2012 after having accumulated 5477 hours and 55 minutes of flight, then stored.

In summary, its successive codes were:

The aircraft was recovered on 10 February 2021 after being disassembled by the aircraft maintenance, repair and storage (GERSA) group stationed at Châteaudun.

The photos of the E5 in service: 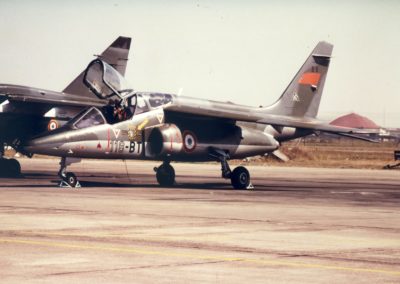 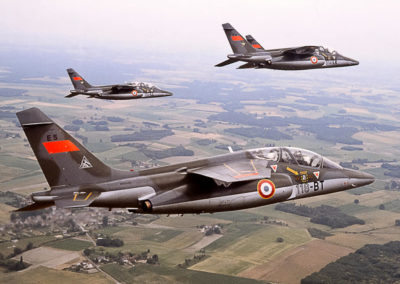 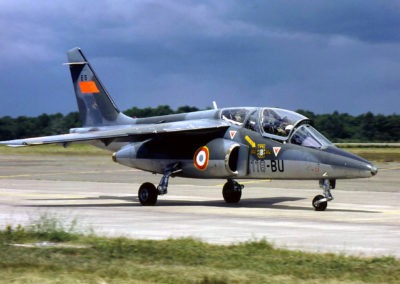 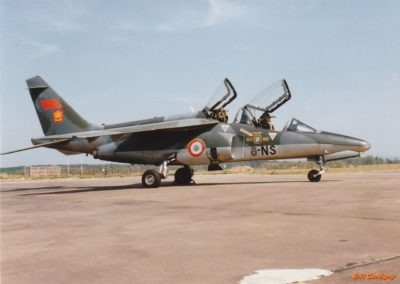 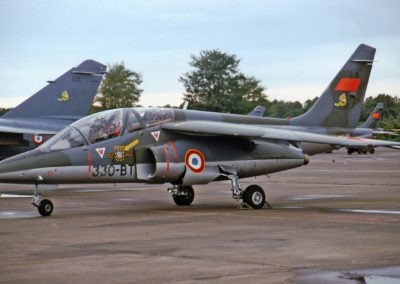 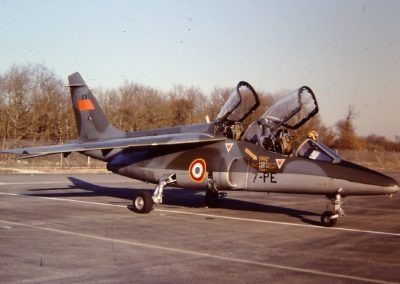 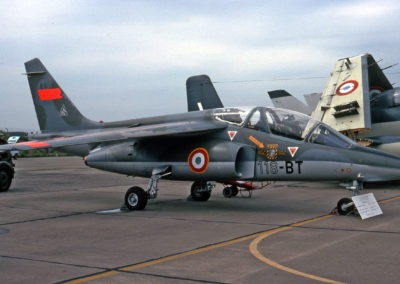 We warmly thank Xavier CAPY who allowed us to trace the history of the device and found us photos of our device with all its registrations.

The photos of the salvage 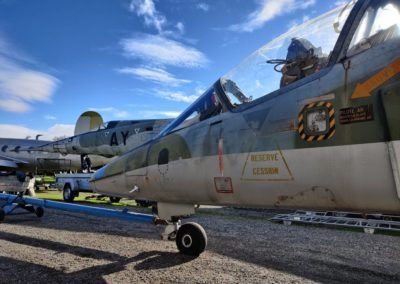 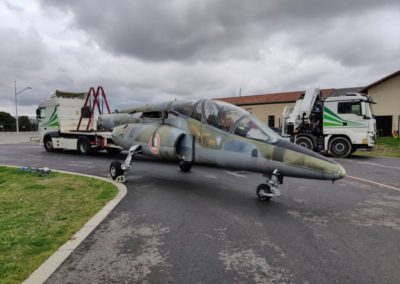 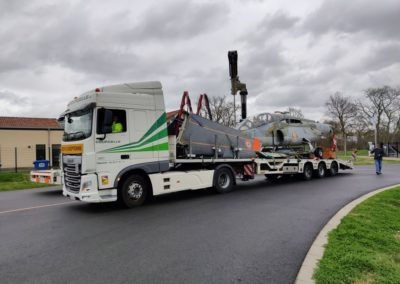 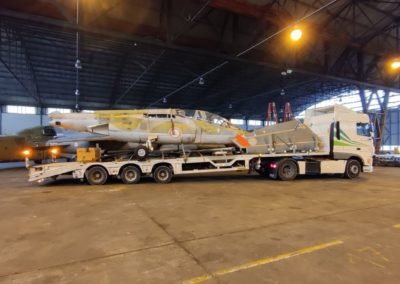 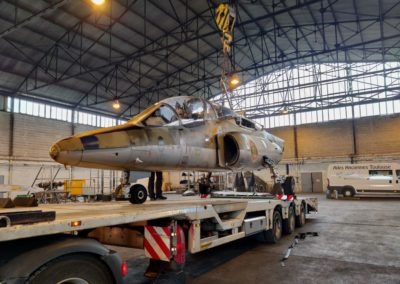 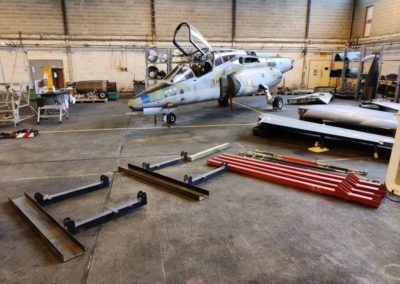 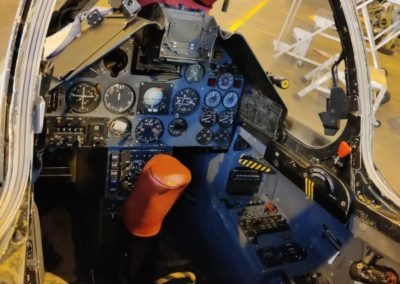 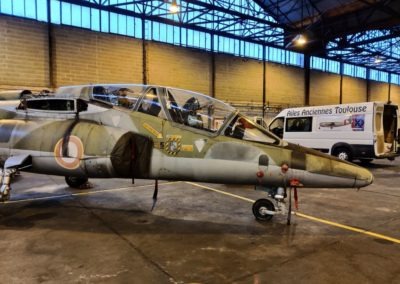 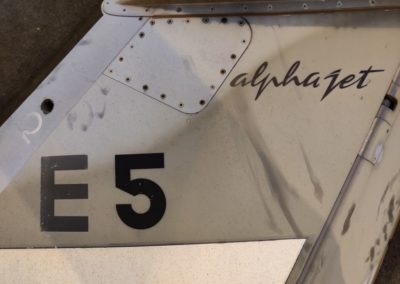 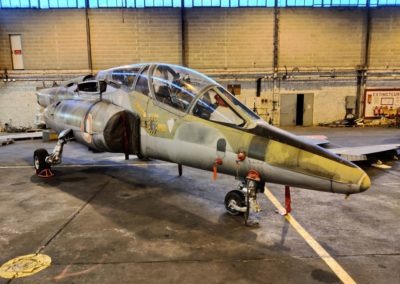