History The predecessor of the Texan, the NA-16, first flew in 1935. However, the US Army Air Force was not… 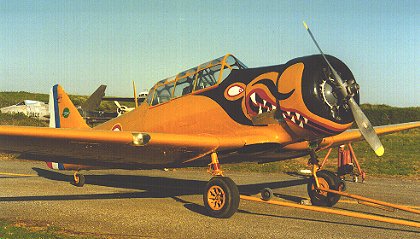 The predecessor of the Texan, the NA-16, first flew in 1935. However, the US Army Air Force was not satisfied with this first trainer developed by North American. The company therefore improved the aircraft, installing e.g. a retractable undercarriage and a machine gun for gunnery training and thus created the aircraft that was to become the standard training aircraft of the US and its allies from the Second World War until the 1950s. Some 20.000 T-6 Texans were manufactured in various versions and delivered to customers all around the world. In some countries, the Texan remained in service as a Trainer until the early 1990s. A Texan, called “Harvard” by the British, was also the longest-serving aircraft in the Royal Air Force: this particular aircraft was taken on strength in 1945 and served as a chase aircraft for helicopter trials until the 1990s, a role for which it was much more suitable than more modern aircraft due to its low stalling speed.

France took delivery of 923 Texans from 1949 onwards. They served as trainers for the French Air Force and Navy until 1971. During the colonial wars, some French Texans were armed with machine guns and bomb racks and used for surveillance patrols over North Africa. Other countries, too, repeatedly used the T-6 as light ground attack aircraft.

Nowadays, dozens of Texans are still airworthy and popular among aircraft enthusiasts as relatively affordable “warbirds”.

Our Texan was among the first aircraft recovered by the Ailes Anciennes Toulouse, at La Ferté-Alais in 1980. It was restored in the 1980s, but unfortunately damaged again in a strong gale in 1999 (when it had a close encounter with our F-104 Starfi ghter). We repaired it again and replaced damaged parts. 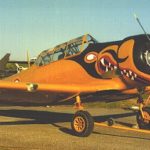 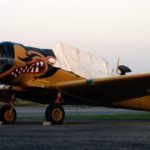 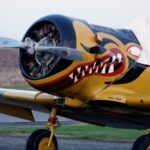 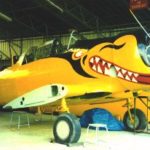