History The Espadon is a very rare research prototype. It was originally developed to contend in a French government call…

The Espadon is a very rare research prototype. It was originally developed to contend in a French government call for a heavy multi-role fighter and first flew on the 12th of November 1948. In order to comply with the specification, it had a very bulky fuselage capable of carrying four machine guns, four cannon, a radar or cameras, the whole fuel load, the armoured cockpit and the engine. The thin wings only carried the main landing gear. However, in spite of satisfactory level-flying characteristics, it rapidly became clear that the aircraft was underpowered and had a poor climbing performance. SNCASO modified and improved the aircraft, but it remained inferior to its competitor, the Dassault Ouragan.

However, four prototypes had been completed and were then used as research aircraft and flying test beds for various engines (Turbomeca Marboré, Gabizo…). Unfortunately, in 1956 the remaining aircraft were grounded and transferred to weapon test ranges where they met their fate as targets for live-firing exercises.

The displayed aircraft is the third prototype and the only surviving Espadon. In 1953, its wings were replaced by bigger ones, and a rocket engine “SEPR” installed. In this configuration, it became the first European aircraft to pass the sound barrier in level flight on the 15th of December 1953, piloted by Charles Goujon.

At some point in time, it was transferred to the firing range at Suippes, Marne. Numerous impacts of small-arms fire and shrapnel, dating from this era, can still be seen on the fuselage and fi n. In 1971, the remains of the aircraft (only the fuselage and a part of the fin survive) were located by the Ailes Anciennes Alsace and saved from the firing range. It joined our collection in 1987 and a truly unique piece of history. 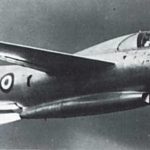 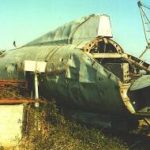