History Republic developed the F-84F as an improved version of the F-84E and G, which was a first generation jet… 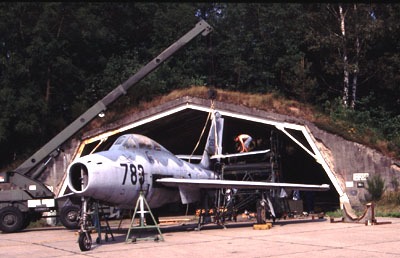 Republic developed the F-84F as an improved version of the F-84E and G, which was a first generation jet fighter quickly outclassed by other aircraft. However, the swept-winged F-84F was still underpowered, and a complete redesign of the fuselage became necessary to accommodate a new engine. The prototype of this version, that by now had become a completely different aircraft, first flew on the 14th of February 1951 and was followed by 2348 production aircraft.

Unfortunately, the F-84F had still inferior performance compared to other fighters of the era such as the MiG-15 or the F-86. It was therefore used primarily in the ground-attack and especially the reconnaissance role, in which it remained in service with the Greek Air Force until 1991.

This aircraft is an ex-Belgian Air Force example. We received it in 1988 when it was transported from Beauvechain (Belgium) to Toulouse by road. It has been partially restored to represent a French Air Force machine used during the Suez Crisis in 1956. A noteworthy feature of our aircraft is the lack of the horizontal tail plane. After the retirement of the type from Belgian use, many old F-84Fs had been “disguised” as Mirage IIIs by dismantling the horizontal tail plane, and adding wooden plates between the wings and fuselage, giving it a triangular wing. The objective of this scheme was to make the Soviets, who photographed the air bases from satellites, believe that Belgium had large numbers of the modern Mirage III.

Our second F-84F is an ex-Greek Air Force aircraft. It had been returned to the US at the Ramstein Air Base in Germany and arrived in Toulouse in 1995. At Ramstein, the aircraft had received a non authentic grey colour scheme. However, the paint is gradually fading, revealing the aircraft’s original Greek colour scheme. 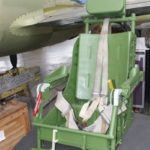 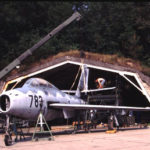 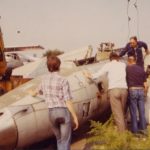