History The origins of the Super Guppy go back to the Second World War B-29 Superfortress. Based on this aircraft,… 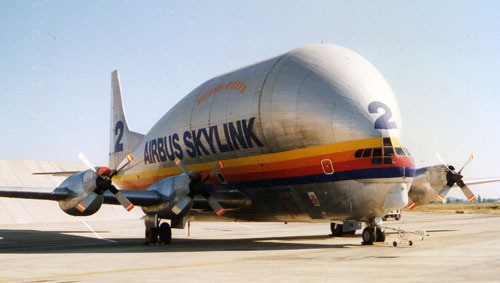 The origins of the Super Guppy go back to the Second World War B-29 Superfortress. Based on this aircraft, Boeing developed the Boeing 377 Stratocruiser and C-97 Transport aircraft.

In the early 1960s, the space race was going on at full speed, and NASA desperately searched for a means to transport rocket parts from the American West Coast where they were manufactured to Florida. Aero Spacelines proposed a transport aircraft based on the Boeing 377 / C-97 modified with a bulbous fuselage capable of loading oversized cargo. The solution was accepted, and the first Guppy flew on the 19th of September 1962.

However, Airbus in Europe would soon face a similar problem: With the sections of the A300 under development being manufactured all around Europe, a search was on for a way to transport them to the final assembly line located in Toulouse at a reasonable cost. Land transport from the harbour of Bordeaux had revealed itself impractical when it took one month (and dozens of cut trees, as well as many disconnected electricity cables) to bring the parts for the prototype A300 to Toulouse. After some heated discussion, it was therefore decided to procure two Super Guppies in the US that entered service with Airbus in 1971 and 1973, respectively. From then until 1996, the Super Guppy fleet, which had meanwhile grown to four aircraft, flew Airbus parts, as well as Concorde and Dassault Mercure parts, to the final assembly lines.

Our Super Guppy is the second aircraft, fi rst fl own on the 24th of August 1972 and delivered to Airbus in 1973. It made its last of 6261 flights (totalling 14,110 flight hours) on the 15th of March 1996 and joined our collection immediately afterwards. Its electrical and hydraulic systems are still operational. 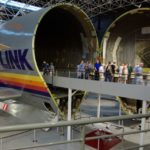 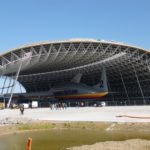 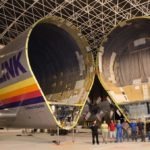 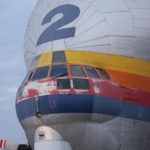 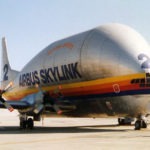 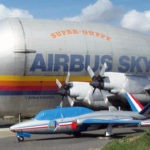 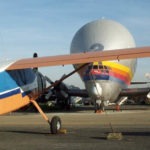 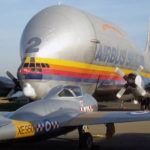 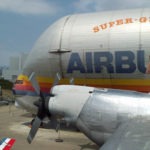